Pine Honey is an Actual Thing

I had always assumed that honey was made only from the nectar of flowers; however, I recently learned about pine honey while surfing the internet. Pine trees do not produce flowers in the botanical sense of the word, rather, they produce cones and cones do not produce nectar. So how could pine honey be an actual thing?
It turns out that in the eastern Mediterranean, mainly in Greece and Turkey, there occurs a scale insect of pine trees with the scientific name of Marchalina hellenica. The insect sucks pine tree sap and, because the sap contains more sugars than the insect can use, it excretes the excess sugars as honeydew. Forest honey bees collect the honeydew and convert it into pine honey.
Although the fact that it existed was a surprise, I was not at all surprised to learn that pine honey is not particularly sweet and has a distinctive, slightly bitter flavor with a strong aroma (Benefits of Honey 2013).
Pine honey is not simply an unusual novelty item. It is an economically important product accounting for almost 65% of annual honey production in Greece and about 50% in Turkey (Hatjina & Bouga 2009). As is done with other monofloral honeys, beekeepers will transport their hives to pine forests during peak honeydew production. 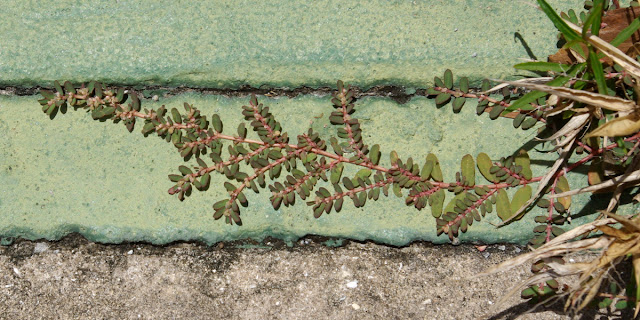 Euphorbia thymifolia (synonym: Chamaesyce thymifolia) is an unassuming little annual native from Mexico to Argentina, the West Indies, and the paleotropics (Africa and Asia). It has been introduced in the Hawaiian islands and is considered by some to have been introduced in Florida, but the Atlas of Florida Vascular Plants lists it as native. I have observed it at three sites in Florida: (1) in pavement cracks in downtown Tampa; (2) near the mouth of a gopher tortoise burrow in a sandhill habitat in Tampa; and (3) in a highly disturbed old field that had originally been sand scrub at Jonathan Dickinson State Park in Martin County.

As is the case with most annual, weedy spurges formerly in the genus Chamaesyce, it is very easily grown and, once introduced into a garden, you will likely have it forever. Although it can be a weed of potted plants, thus far it has not been a problem in the garden. Certainly, it is nowhere near as aggressive and abundant as the quadrumvirate of weedy spurges in my yard that can sometimes number in the hundreds: Euphorbia graminea, Euphorbia hirta, Euphorbia hypericifolia, and Euphorbia ophthalmica. 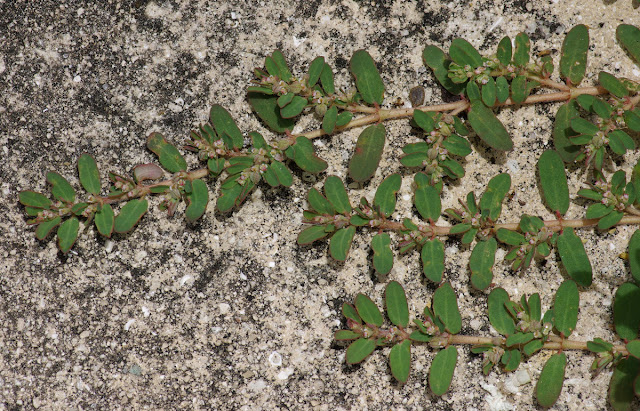