Zeuxine strateumatica is a small orchid native to tropical and warm-temperate regions of Asia. It is now well established elsewhere, including Puerto Rico, much of Florida, and parts of Georgia, Hawaii, Louisiana, and Texas. It readily grows in lawns and in landscaped areas covered with bark mulch. It appears to be naturally short-lived and is very difficult to transplant from the ground into a pot; however, if seed is gathered up when ripe in the spring and scattered among potted plants, a few lawn orchids will usually show up in the pots the following winter or spring.
Image and text © 2013 Rufino Osorio
Posted by Rufino Osorio at 4:35 PM 2 comments 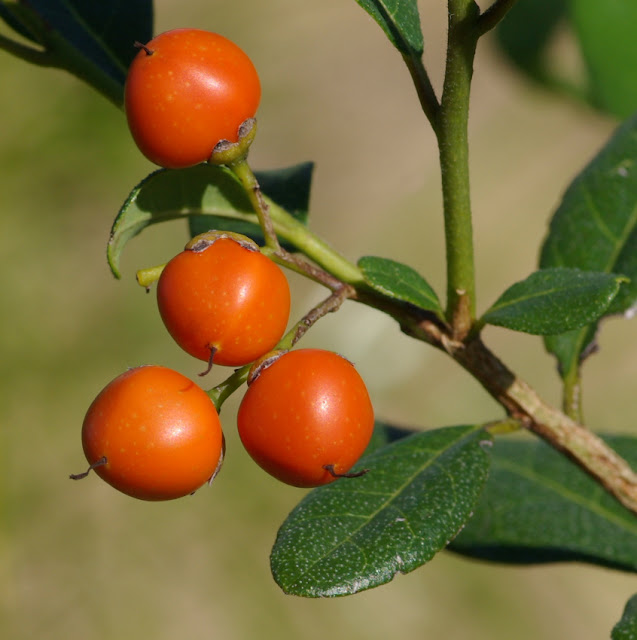 Rough strongbark is a Florida state-listed endangered plant with significant wildlife value. It is a large shrub or small tree with small, dark green leaves whose upper surface has coarse, rough hairs that give the leaves a sandpaper-like texture. Attractive and sweetly fragrant white flowers are borne nearly year around and these are much sought after by various insects, including bees and butterflies. The flowers are followed by rather large, highly ornamental, orange berries that are eaten by birds, raccoons, opposums, and other animals.
Rough strongbark occurs as a native plant in Florida only in the Florida Keys but it can be grown at least as far north as Palm Beach County and probably much further north if it is not grown too far from the moderating influence of the Atlantic Ocean or the Gulf of Mexico. Its cultivation presents few problems so long as it is provided with well-drained rocky or sandy soil and abundant sunlight. Once established, rough strongbark is extremely drought tolerant and even small plants have readily established themselves in the driest part of my garden. Propagation from cuttings and seeds is difficult; however, with time, numerous self-sown seedlings will appear under mature plants and these can be potted up when they are a few inches high. Since rough strongbark readily sprouts from the roots wherever the roots are cut or injured, it can probably also be propagated from root cuttings.
Rough strongbark is extremely tolerant of hot, dry conditions and poor, alkaline soils. Thus, it is useful as a landscape plant or hedge in difficult urban situations such as roadsides and parking lots. The abundant fruits falling on sidewalks can make quite a mess and it is not recommended as a residential street tree, although it is otherwise an excellent street tree.
Image and text © 2013 Rufino Osorio
Posted by Rufino Osorio at 4:15 PM 0 comments 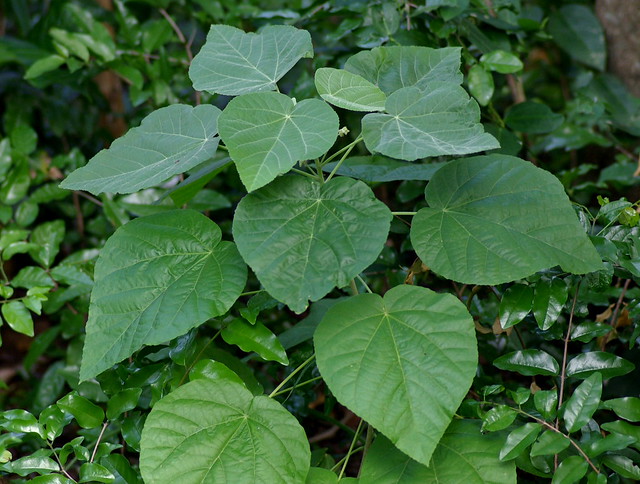 Jost Van Dyke's indian-mallow is a highly endangered Caribbean shrub or small tree known from three islands in the British Virgin Islands and one island off the coast of Puerto Rico. An article by Fred Kraus provides very detailed information about this rare plant. The image above is of a young plant growing in a private garden in Fort Lauderdale, Florida. The plant is surrounded by numerous seedlings of black ironwood (Krugiodendron ferreum). The genus to which Jost Van Dyke's indian-mallow belongs has been a matter of some controversy and it is sometimes found listed as Abutilon virginianum or as Sida eggersii.

Warning: Antigonon leptopus is listed as a Category 2 invasive pest plant by the Florida Exotic Pest Plant Council. It is included here only as an aid to identification and not to promote its cultivation in any way whatsoever. 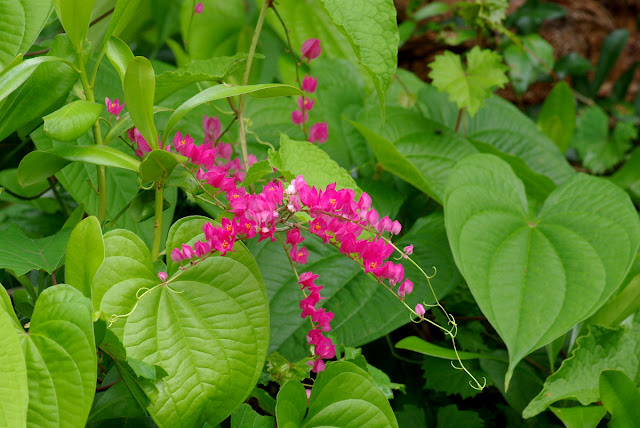 Coral vine, Antigonon leptopus, is a vigorous, long-lived, evergreen, tendril-climbing vine native to Mexico and possibly also to western Guatemala. It grows from large, tuberous roots and is extremely difficult to eradicate since any piece of the tubers left in the ground can produce a new plant. It is capable of tolerating extreme adversity, such as prolonged drought, once it is established since it will die back to the ground and sprout new stems once conditions have ameliorated. The heart-shaped leaves are deeply veined and the plant bears pretty pink, or rarely white, flowers during the warmer months of the year, or nearly year around in warm climates.
Coral vine grows aggressively and can produce a smothering blanket over trees as high as 40 feet. It is usually found in disturbed sites but is occasionally found along the edges of forests, where it tolerates a wide range in the level of light and soil moisture. The image shows a plant that is established behind the nature center building at Okeeheelee County Park in Palm Beach County, Florida. Nearly all of the foliage in the image belongs to a non-native Dioscorea species (wild yam), probably Dioscorea alata, which is another non-native vine that is listed as invasive in Florida. Also visible in the image is the foliage of the native shrub, myrsine (Myrsine cubana), and the native vine, wild grape (Vitis rotundifolia).
Image and text © 2013 Rufino Osorio
Posted by Rufino Osorio at 3:17 PM 0 comments

Pineland lobelia is a an annual lobelia that is endemic to Florida and has been recorded in St. Johns County in north Florida from where it ranges south to Collier County on Florida's west coast and to St. Lucie County on Florida's east coast. In the spring of 2005, a single plant was established from a cutting given to me by a native plant acquaintance. The cutting was collected from plants growing in a ditch in Martin County and these plants constituted a new county record since the Atlas of Florida Vascular Plants does not list pineland lobelia as occurring in Martin County. I rooted the cutting and, in due course, it flowered and set seed. The seed was broadcast among several potted native plants and a colony of pineland lobelia has thrived at my home ever since.

Innumerable plants now come up every year in my potted plants, as well as in cracks in my driveway and in my wildflower beds. Pineland lobelia grows best in open, sunny, moist areas but it will also grow in light to medium shade. In drier spots, it behaves as a winter annual but, if there is sufficient moisture, it will grow year around. Seeds germinate vigorously with the arrival of cool autumn weather and seeds are the most effective way of propagating pineland lobelia. As I mentioned above, it can be grown from cuttings but plants produced from cuttings do not develop normally since they have a tendency to devote all of their energy to flowering and soon seed themselves to death. 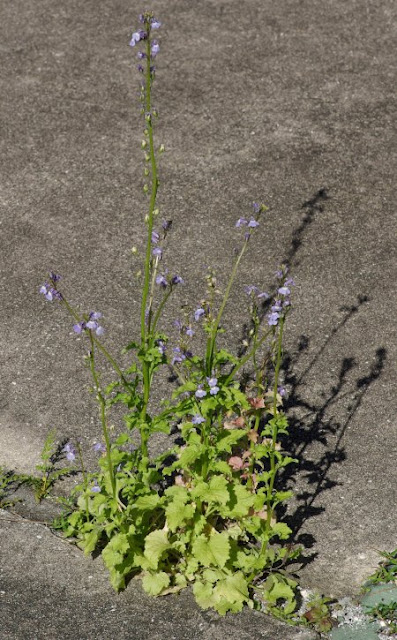 Pineland lobelia has limited wildlife value but it is useful for adding a bit of blue color to wildflower gardens as well attracting native bees and honeybees to the garden. So far, it has not been bothered by pests and its only major fault is that it is an annual that dies after flowering. Thus, it is important to let it go to seed and to provide open, moist areas where it can grow without competition from taller and more aggressive plants. Pineland lobelia can be mistaken for bay lobelia (Lobelia feayana) but pineland lobelia grows from a loose rosette and has erect stems whereas bay lobelia has creeping vegetative stems that root wherever they touch the ground. 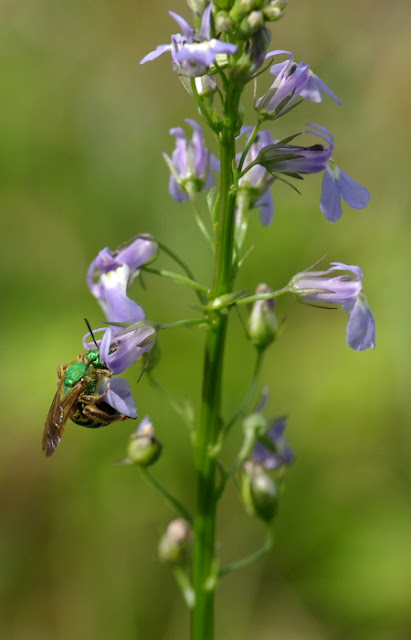