The following are photographs taken during a hike at the Okeeheelee County Park Nature Center on Friday, December 23, 2011. This set of photographs was taken at the parking lot and at the Visitor's Center. The next set of photographs (Part 2) was taken on the hiking trails.
Immediately upon getting out of my car in the parking lot, I saw a nine-banded armadillo (Dasypus novemcinctus) rooting in the soil for worms or grubs just a few feet from the car. He was completely fearless, or perhaps oblivious, and casually went about his business while I snapped about 4 dozen pictures. Since he was in constant motion, all of the pictures were blurry except for four of them, two of which are reproduced below. 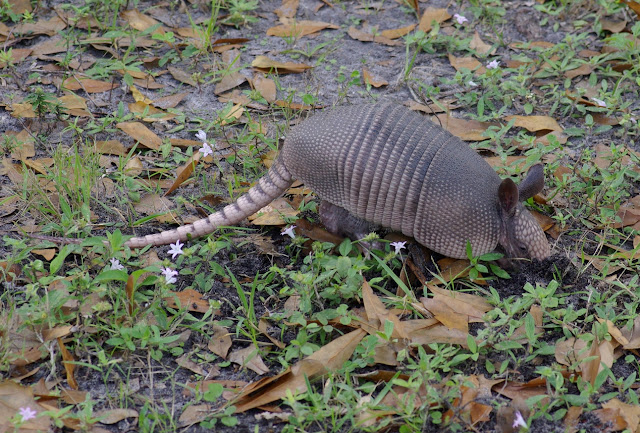 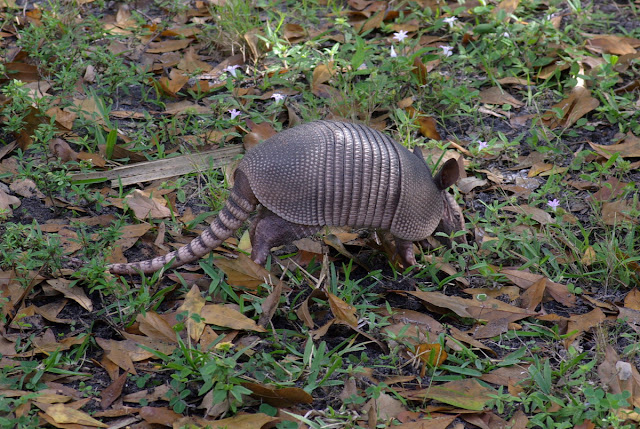 The little pink flowers visible in the armadillo pictures is large-flowered Mexican-clover (Richardia grandiflora), which is seen in close-up below. The plant is neither Mexican nor a clover. It is, in fact, from South America and is in the same family as coffee. It is now one of the most ubiquitous weeds of lawns, roadsides, parks, fields, and the disturbed portions of natural areas in Palm Beach County. It was first seen in Palm Beach County about 15 years ago and in that span of time its population has grown to such an extent that it is perhaps among the top 10 most common herbaceous, non-grassy perennials in the county. It was ever-present along the trails of the nature center and in one area its thick growth was shading a population of the small, native wildflower, Stenandrium dulce (pine pinklet). 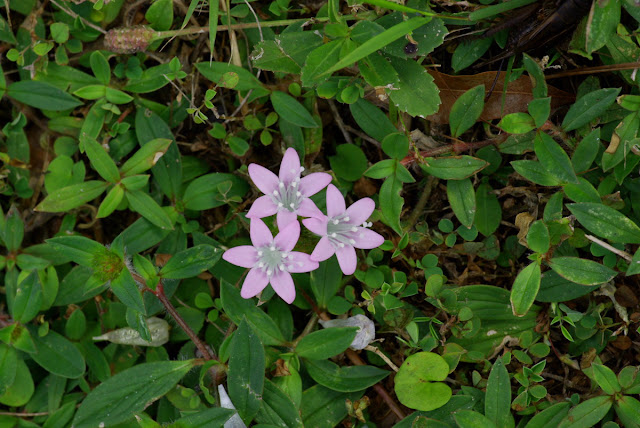 The following pictures were all taken around the perimeter of the visitor's center, which is landscaped with both native and non-native butterfly garden plants. These plants were very effective as there were numerous butterflies, both small and large, visiting these plants that day.
Clerodendrum ugandense (blue butterfly plant), from Africa, was in full bloom. It is said to be a minimally invasive Clerodendrum, some of which are extremely aggressive in gardens due to an abundance of root sprouts. In many ways, it reminded me of the native blue curls, Trichostema dichotomum, on steroids, which is not surprising since both plants are in the mint family (Lamiaceae). 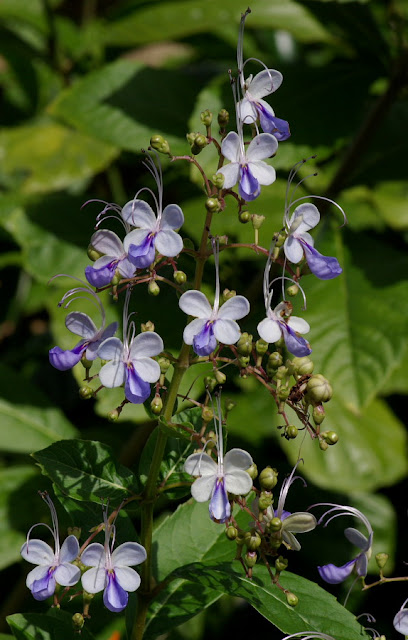 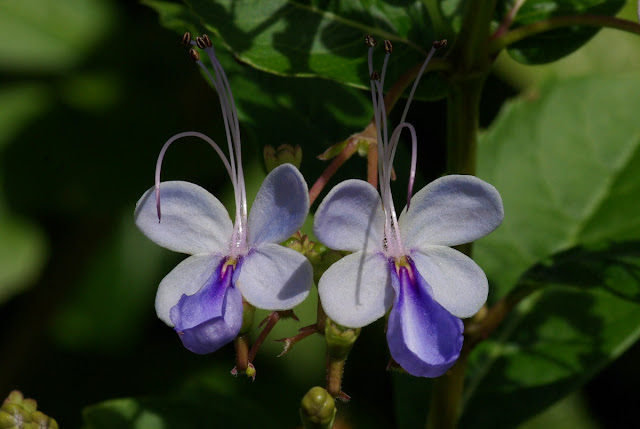 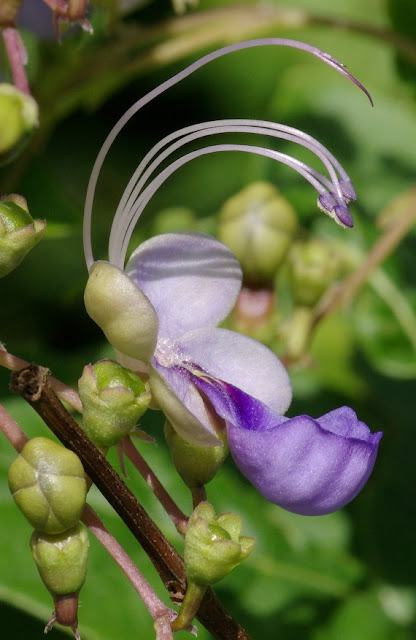 And here is an image of the native blue curls, Trichostema dichotomum, for comparison: 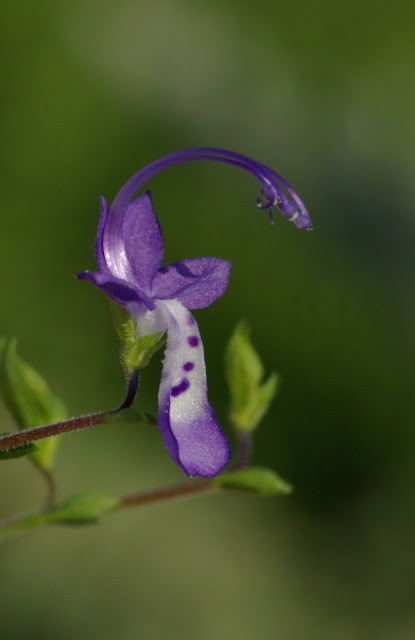 Koanophyllon villosum was an interesting addition to the Okeeheelee County Park Nature Center butterfly garden. It is an endangered relative of the thoroughworts (Eupatorium species) and occurs in Florida, as a non-cultivated native plant, only in Miami-Dade County. It is unusual in being a woody shrub, most other related plants in Florida being herbaceous perennials. It bears innumerable tiny white daisies when in full bloom, at which time it is extremely attractive to nectar-seeking butterflies. Of additional interest is the aromatic foliage, which has an unusual mildly spicy scent or, in some forms, a slightly minty scent. 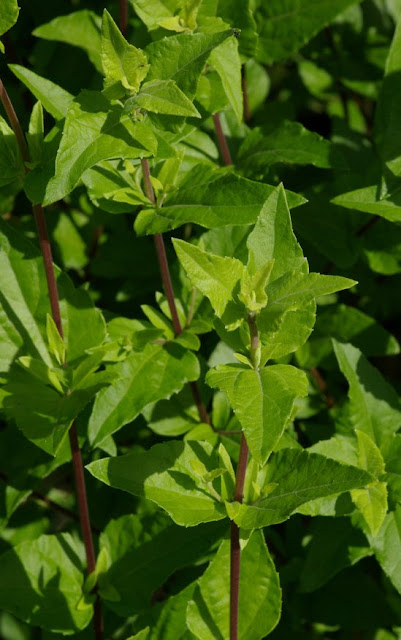 Around the corner from the Koanophyllon, and on the west side of the nature center, was a large clump of Leonotis leonurus, a plant native to Africa. Its bright orange flower buds were extremely attractive and eye-catching . . . 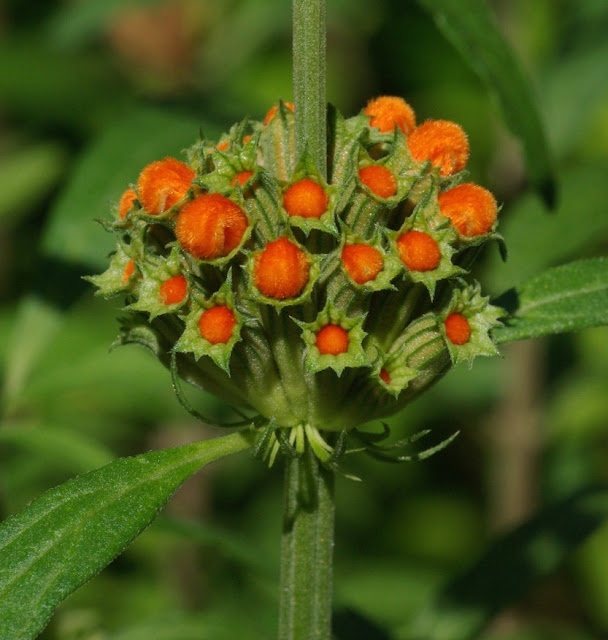 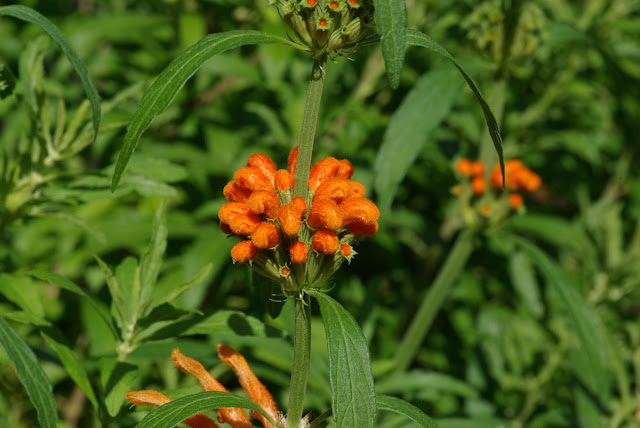 . . . but they opened into slightly dingy-orange flowers. Eagle-eyed readers might notice that the leaves above the flowers in the photo immediately below have crinkled edges. This is due to a viral infection. Such infections were rare in native plants but, as people bring cultivated virus-infected plants into close proximity with native plants, I am beginning to see native plants afflicted with viruses. 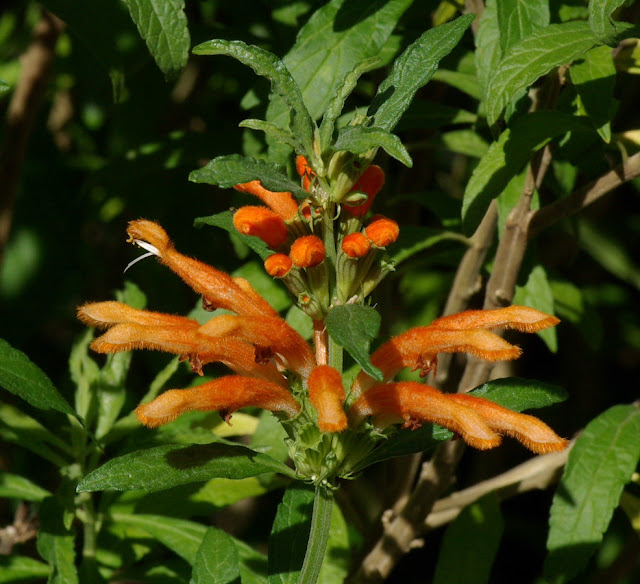 After the flowers have faded, they leave behind an interesting set of green calyces. 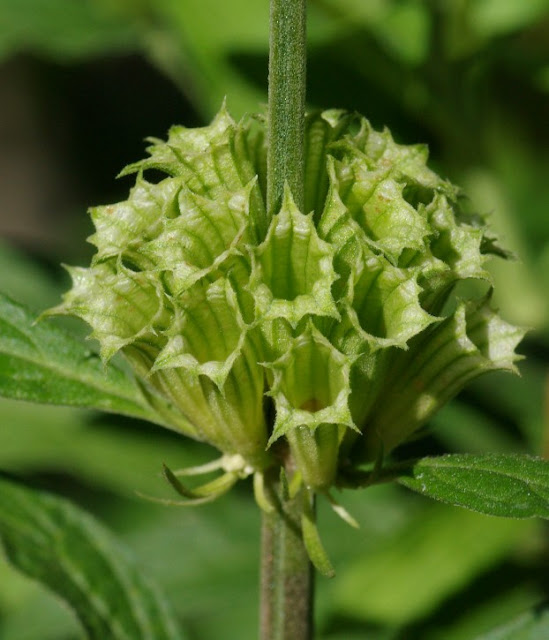 The aptly named fire-spike (Odontonema cuspidatum) from the American tropics grew in a large clump at the front of the nature center and it was visited by numerous brilliant yellow sulphur butterflies, none of which stood still long enough to be photographed. As one can imagine, the combination of yellow butterflies and bright red flowers created a very colorful scene. 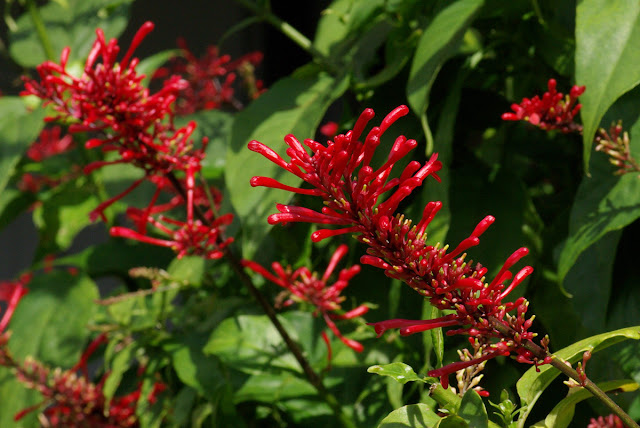 Pentas lanceolata, is one of the most common butterfly garden plants in south Florida; however, I have seen insects visiting this plant exactly twice in 20 years. As usual, no butterflies were to be seen on the brilliant red pentas at the nature center on the day of my visit. 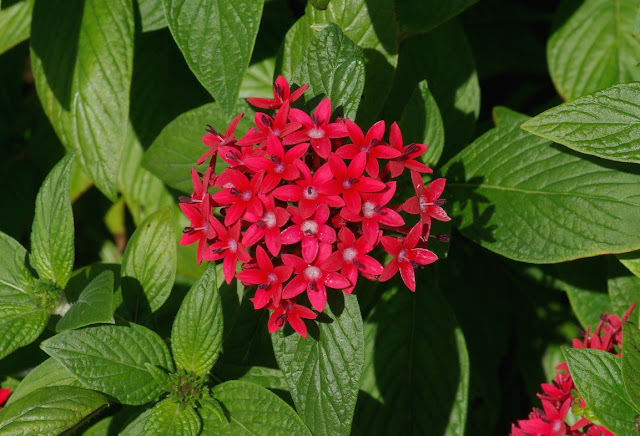 Golden polypody (Phlebodium aureum) grew in a large cabbage palm (Sabal palmetto) and its yellowing leaves provided a bit of "autumn" color on a warm subtropical winter's day. It is a very large fern with a dramatic presence and it is mostly ignored by Florida gardeners, perhaps because it is so common. Were it rare and endangered, it would surely be greatly sought after by plant collectors. 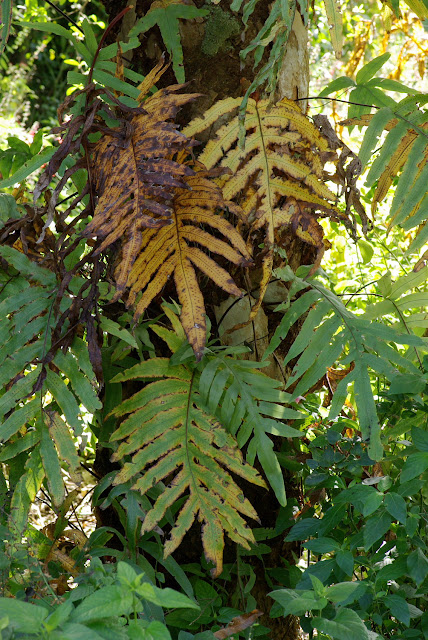 Tropical sage (Salvia coccinea was well-represented in the butterfly garden. This was, of course, no surprise since this native plant is a staple of South Florida butterfly gardens where it attracts both butterflies and hummingbirds. All three color forms—red, pink, and white—were present in the garden. 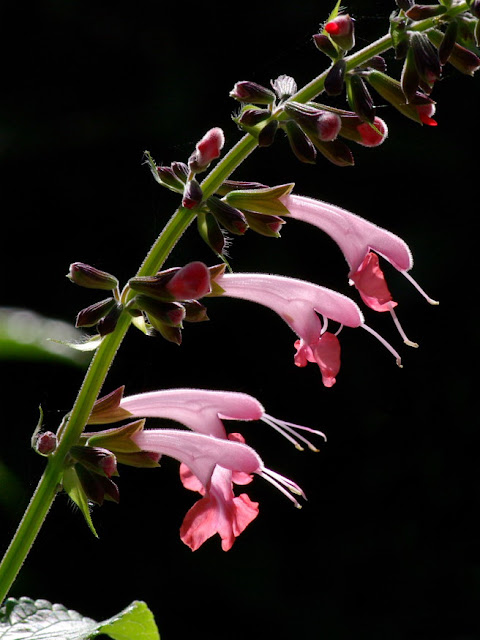 Another staple of butterfly gardens, and equally attractive to hummingbirds, is Sophora tomentosa (necklace pod). The plant in the image below clearly has leaves densely covered with tiny silvery hairs. This identifies it as the non-native var. occidentalis, whose native range is Texas and tropical America. The Florida native var. truncata has leaves that are hairless, or nearly so, at maturity. In the background, is firebush, Hamelia patens, another favorite of butterfly gardeners. 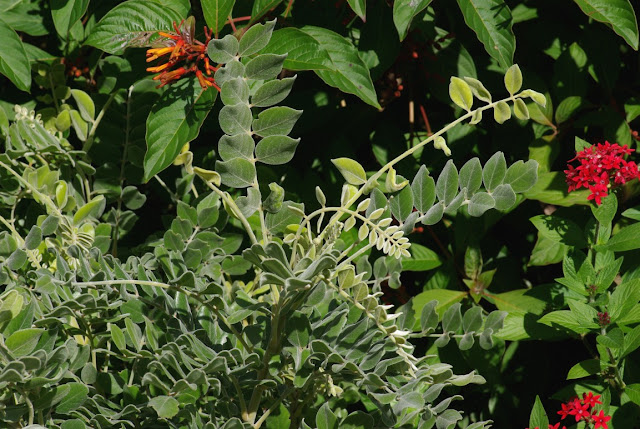