Lindernia microcalyx Is not native to the United States. It is included here as an aid to identification and not to promote its cultivation. 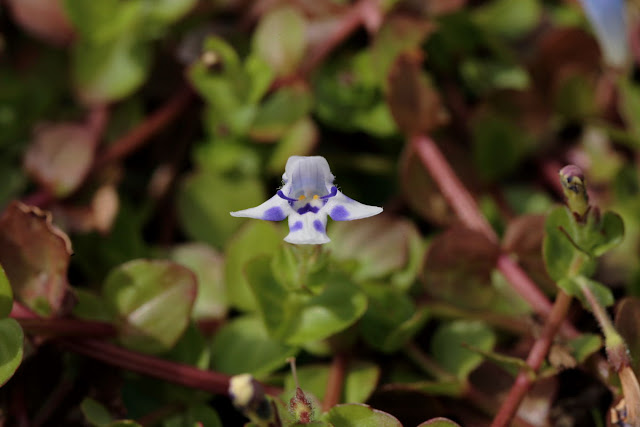 Lindernia microcalyx Pennell & Stehl is an annual or short-lived perennial native to the tropics of North and South America. I found it growing in a somewhat disturbed wet area in Martin County many years ago; however, I did not send voucher specimens to any herbariums so it is not officially listed as an introduced species occurring outside of cultivation in Florida. It is distressingly similar to the native Lindernia grandiflora in its sprawling stems that root wherever they touch moist soil, in its rounded leaves, and showy flowers. It differs in having (1) minutely glandular hairy sepals; (2) thickened pedicels, often noticeably thicker just below the seed capsule; (3) flowers self-fertile with every flower setting a seed capsule, even in isolated plants; and (4) subglobose seed capsules about 2 millimeters long. In contrast, the native Lindernia grandiflora has non-glandular, hairless sepals; filiform pedicels of uniform thickness; usually self-sterile flowers with isolated, solitary plants rarely setting seeds; and seed capsules 4–5 millimeters long. 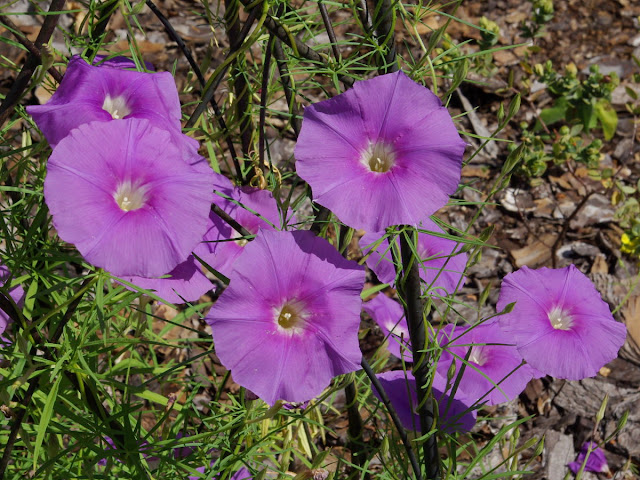 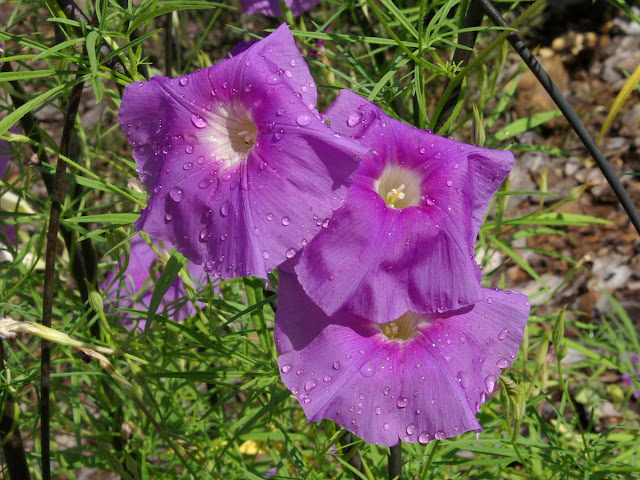 Ipomoea ternifolia var. leptotoma is a desert ephemeral native to Arizona and Mexico. It is horticulturally distinctive in its delicate, lacy leaves, which are divided into 3 or 5 narrow lobes; the rapidity with which it produces abundant flowers; and the striking violet-lavender color of its relatively large flowers.

Desert ephemerals are annuals that are adapted to brief periods of heavy rains and they are remarkable for the speed with which they flower and set seeds. Ipomoea ternifolia var. leptotoma, for example, will flower within a few weeks of germination. As the desert soil dries after heavy rains, the plant begins to die but even dying plants that have lost all their leaves will continue to produce flowers and set seeds so long as the stems remain green. Since desert ephemerals have no water-storing succulent roots, stems, or leaves, there is great urgency to set seeds before the last vestige of moisture is gone and extended hot and dry conditions return to the desert. The plants then lie dormant, in the form of seeds, awaiting the next period of heavy rain.

Posted by Rufino Osorio at 6:47 AM 0 comments

Warning: Glycosmis parviflora has a very high potential of becoming an invasive pest plant. It should not be cultivated in the warm-temperate, subtropical, or tropical regions of the United States and all occurrences outside of cultivation should be promptly destroyed. It is included here only as an aid to identification and not to promote its cultivation in any way whatsoever. 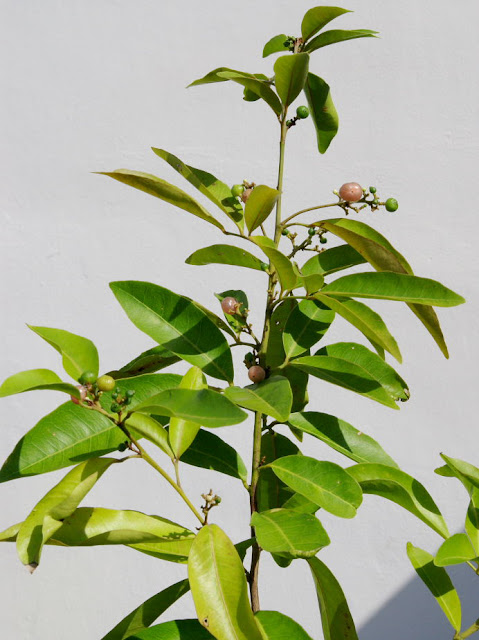 Glycosmis is a genus of approximately 50 species of unarmed shrubs or trees in the citrus family (Rutaceae) native to eastern, southern, and southeastern Asia, with a few species also in Australia. The genus can be distinguished from all other members of the citrus family in Florida, both native and introduced, by the following combination of traits: (1) plant unarmed and lacking spines; (2) fruit a fleshy berry; and (3) terminal and axillary buds, and often the young inflorescences, covered with tiny rust-colored hairs or scales. 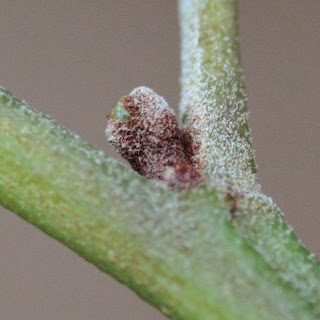 Close-up of an axillary bud covered with tiny rust-colored hairs.

One species, Glycosmis parviflora (Sims) Little, has become established outside of cultivation in the United States, where it has been recorded from Broward and Miami-Dade counties and the Monroe County keys. Originally native to China, Taiwan, Japan, Myanmar, and northeast Vietnam (Dianxiang & Hartley 2008), it was introduced into the United States as a curiosity of ethnobotanical interest and as possible genetic material in the breeding of citrus fruits (Wiersema & León 1999:243). Plants identical to Glycosmis parviflora appear in a wide variety of internet sites under the name Glycosmis pentaphylla; however, every instance of Glycosmis pentaphylla that I have seen on the internet shows images of a plant with leaflets that have entire or slightly wavy margins, which are typical of Glycosmis parviflora. In contrast, Dianxiang & Hartley (2008) state that the leaflets of Glycosmis pentaphylla have toothed (serrated) margins. 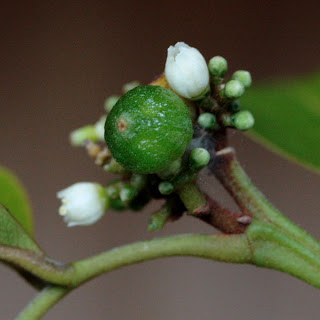 Glycosmis parviflora displays the following attributes that are associated with invasiveness: (1) Young plants are shade tolerant; (2) plants begin flowering and fruiting when less than two feet tall and less than three years of age; (3) plants are self-fertile and abundantly produce fruit, even when growing in isolation; (4) in warm regions, flowers and fruits are borne throughout the year; (5) relatively pest free; and (6) fruit dispersed by vertebrates (birds and mammals). Although it is not presently listed as an invasive plant, it should be watched closely and all occurrences outside of cultivation should be promptly destroyed. 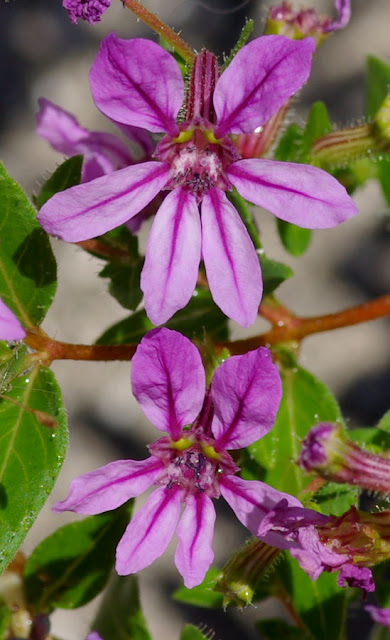 Cuphea glutinosa is a short-lived South American perennial that has been found outside of cultivation in wet ground in Louisiana and Texas. The plant has sprawling stems and forms a small groundcover several inches tall and about one-half to one square foot in extent. The small flowers are about half an inch in diameter but are showy and conspicuous because of their bright violet-pink color. It was rather popular for a brief period among collectors of cottage-garden-style plants but it has been eclipsed by taller and showier Cuphea species and hybrids and it is now very rarely available in horticultural commerce. This is perhaps not unfortunate given its propensity to establish itself in sunny areas with moist or wet soils. 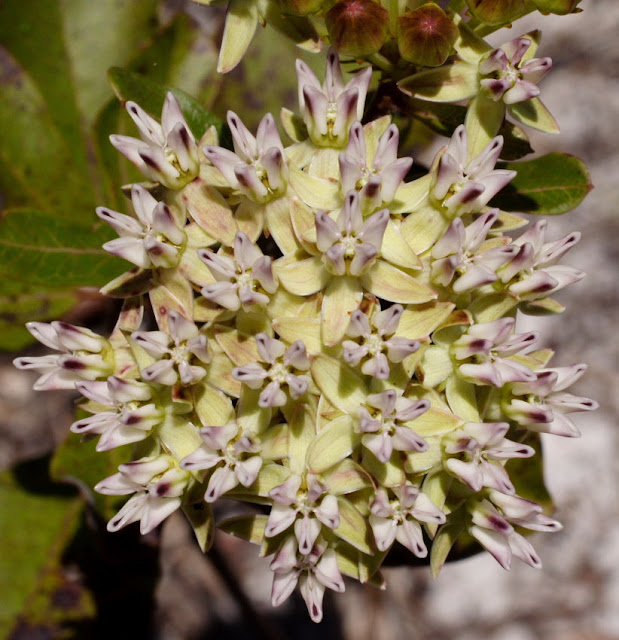 Curtiss's milkweed is a state-listed endangered species with specialized habitat requirements. It is found almost exclusively in scrub habitats where it tends to favor areas of pure sand with very little vegetation. It is remarkable in that it is one of the few plants that readily colonizes areas of pure sand at the edges of stable blowouts.

Geologically, a blowout is a depression in a sandy habitat caused by strong winds. Blowouts get their start when some disturbance, such as fire, extended drought, off-road vehicles, or human or animal foot traffic, results in the loss of protective vegetation. Sometimes, a positive feedback cycle forms where the blowout causes plants to die along its periphery, this makes the blowout bigger, and this in turn causes more plants to die, resulting in an ever expanding area of pure sand devoid of any vegetation.

Curtiss's milkweed occurs as a native plant only in the State of Florida. Within the state, it has a wide range and has been recorded in many counties from Clay County in the north to Broward and Collier counties in the south; however, it is endangered in spite of its wide distribution because of its exacting habitat requirements and habitat loss. 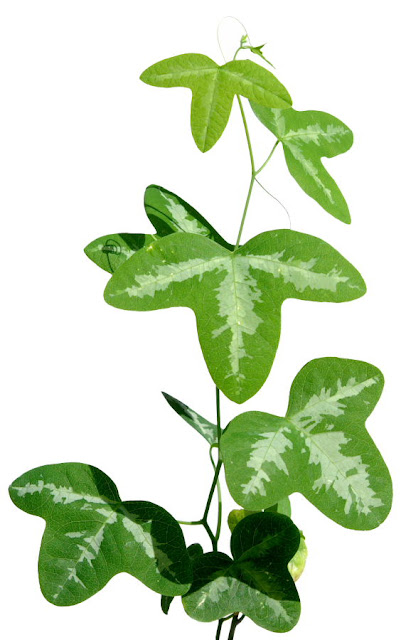 Yellow passion vine is a perennial vine that climbs by means of tendrils and has stems that can reach 3–5 meters (10–16 feet) in length. It favors shady, moist woodlands and forests but is remarkably adaptable so long as it is not subjected to long spells of hot and dry conditions. The leaves can vary from solid, dark green to pale green, often with beautiful, silvery variegations on the upper surface, as seen in the image above of a plant obtained from Meadow Beauty Nursery. The tiny flowers are only about 1.5 centimeters (half an inch) in diameter and are nondescript from a distance; however, they reward close examination due to their intricate and delicate structure.

As with other native passion vines, yellow passion vine may be profitably grown in butterfly gardens, where its leaves are used as a caterpillar food plant by gulf fritillaries (Agraulis vanillae), julias (Dryas julia), and zebra longwings (Heliconius charitonius). This interesting native vine also has a remarkable association with a highly specialized bee, the passiflora bee, Anthemurgus passiflorae. It is a small black bee whose females collect, as the sole food source for their larvae, only the pollen of yellow passion vines (Neff 2003).

Yellow passion vine is botanically interesting as the most cold-hardy and northern growing of any passion vine native to the Western Hemisphere. It occurs as a native plant only in the United States, where it has a considerable range that includes much of the eastern half of our country. 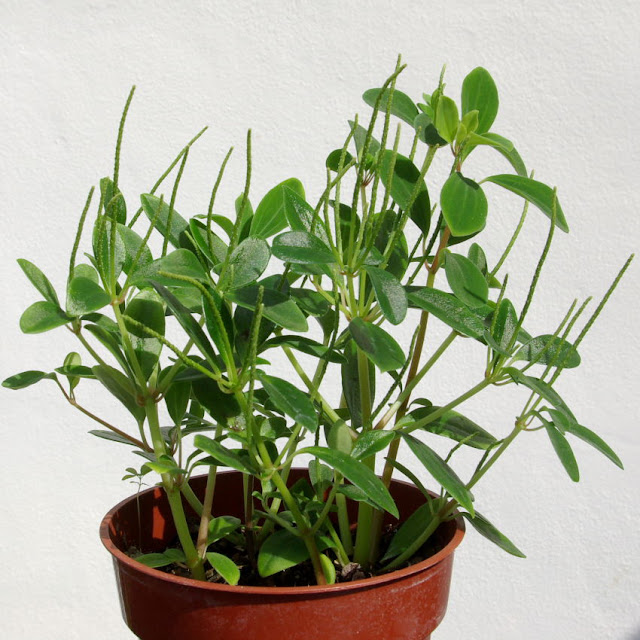 Florida is the only state in the continental United States with native Peperomia species. Eight occur in Florida, two non-native species and six native species. Of the native species, all but one are rare, state-listed endangered plants (Wunderlin & Hansen 2008). Peperomia humilis A. Dietrich is the Florida native species with the greatest geographic range and it occurs in 12 counties from Duval County in the north to Collier and Miami-Dade counties in the south.

Peperomia humilis is fairly common in cultivation among Florida native plant gardeners and is moderately easy to grow. Optimum requirements are a brightly lit but shady spot in well-drained soil that does not dry out excessively. Failure to successfully cultivate this plant is most commonly due to overwatering it or planting it in poorly drained soils. As with most peperomias, it makes an ideal houseplant so long as the soil is allowed to become almost completely, but not quite, dry between waterings and it is not located in a very hot, dry spot.