Warning: Youngia japonica is an extremely pernicious non-native weed. It is included here only as an aid to identification and not to promote its cultivation in any way whatsoever. 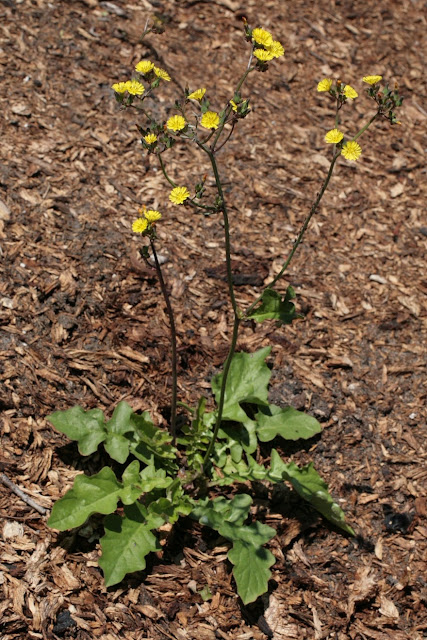 Youngia is an Asian genus of about 30 species of annuals and biennials (or rarely perennials) in the daisy family. One species, Youngia japonica, is now a pantropical weed established throughout the warmer parts of Africa, Europe, Asia, Australia, Pacific Islands, and North and South America (Spurr 2006). Youngia japonica has been reported in the United States from every Gulf state as well as Arkansas, the District of Columbia, Hawaii, Kentucky, Maryland, North Carolina, Pennsylvania, South Carolina, Tennessee, and Virginia. Its presence as far north as Pennsylvania is perhaps indicative of significant cold tolerance and it may well become a truly cosmopolitan weed.

Youngia japonica forms a basal rosette of lobed leaves somewhat reminiscent of dandelions but it differs by its branched inflorescence, which bears one or two leaves and carries several to numerous small flower heads resembling tiny dandelions. The fruit is a one-seeded cypsela crowned by a tuft of stiff hairs that aid in dispersal by the wind. It is a remarkably adaptable plant and can grow in any moist site in full shade to full sun. It is usually not found in dry areas but it will tolerate considerably dry soil if situated in a shady spot.

Youngia japonica grows especially well in the pots of ornamental potted plants, both in gardens and commercial plant nurseries, and a single plant can quickly multiply into thousands, infesting every pot throughout an entire nursery. When such potted plants are shipped elsewhere, Youngia japonica is also inadvertently spread to new locations. For example, the first time I saw this species was in a specialty nursery in Chicago, where potted plants had been shipped in from Florida. All it would take is for the nursery owners to place the pots outdoors for the summer and it is likely that yet another non-native weed would soon be established in Chicago.

Once it builds up to a large population, Youngia japonica is extremely difficult to eradicate because even depauperate plants only an inch tall can flower and set seed, and such tiny plants are easily overlooked while weeding. In addition to being a nursery and garden weed, Youngia japonica is a common and tenacious lawn weed. 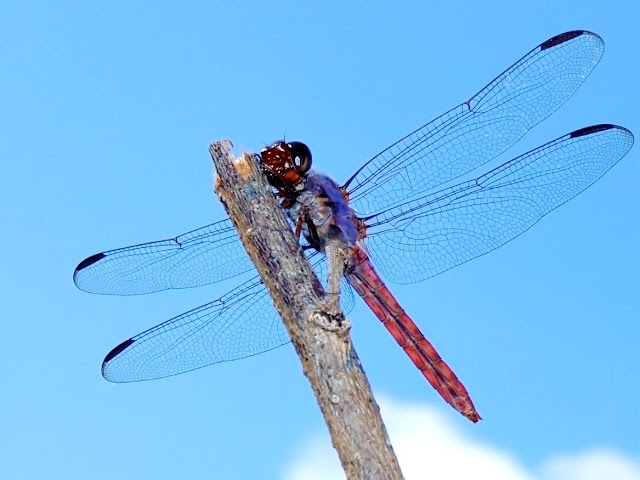 This striking image of a male roseate skimmer, Orthemis ferruginea, was taken by Rob Hopper. The roseate skimmer is a dragonfly found in the southern United States, from where it extends south to Brazil and east into the islands of the Caribbean.

Warning: Silybum marianum has been listed as an invasive pest plant or noxious weed. It is included here only as an aid to identification and not to promote its cultivation in any way whatsoever. 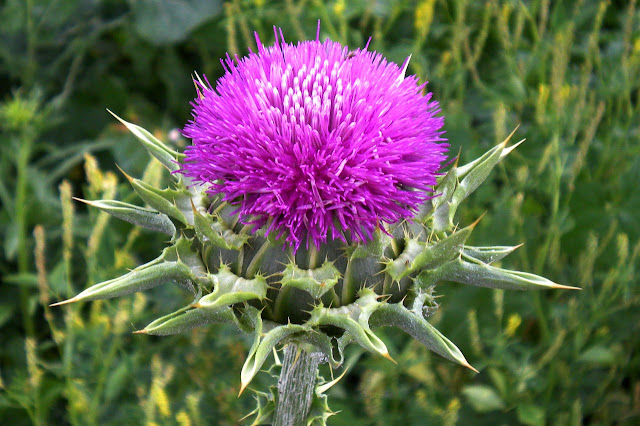 Silybum marianum is a biennial or winter annual originally native to the Mediterranean regions of Europe, western Asia (Israel and Turkey), and northern Africa (Egypt). It is now widely established outside of cultivation as a weed in tropical and southern Africa, northern Europe, the British Isles, Australia and New Zealand, and North and South America. It is readily identified by the spiny leaves that are conspicuously variegated, as well as by the flower heads, which are subtended by bracts whose tips expand into a leafy, spine-tipped appendage. 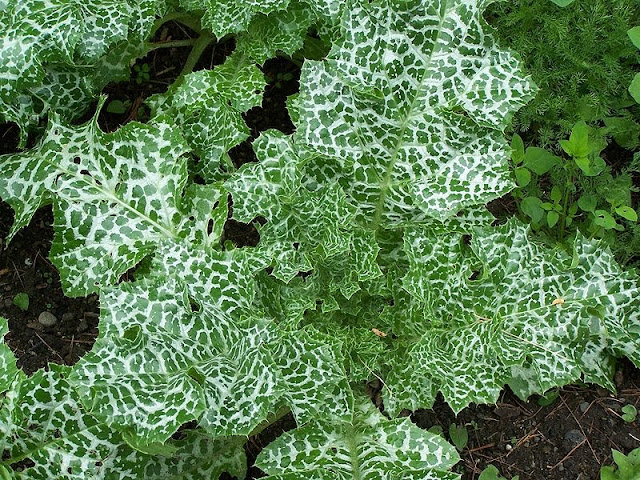 Foliage of young plant. © by Valérie75 2006. Used under a Creative Commons license.

Milk thistle seed extract (silymarin) has shown promise in the treatment of liver diseases, cancer, hepatitis C, HIV, diabetes, and high cholesterol, as well as protective effects against liver damage by poisonous mushrooms; however, there have been few high-quality randomized clinical trials to conclusively prove the therapeutic effects of milk thistle (see, for example, Tamayo & Diamond 2007). 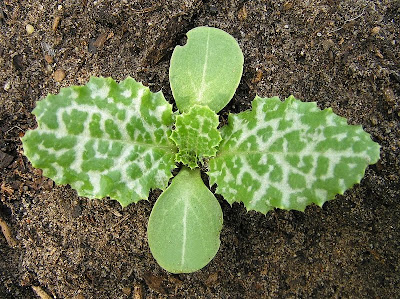 Seedling. © by Beentree 2008. Used under a Creative Commons license.

Silybum marianum was touted as an ornamental garden plant in the 1980s and seeds were widely available from mailorder garden catalogs; however, its popularity has waned as gardeners realized that it dies after flowering and they must then deal with a large mass of dry and wickedly spiny foliage. It is still widely sold as an herb garden or medicinal plant but the therapeutic properties are contained in seed extracts and such extracts are easier to purchase ready-made than to make at home from seeds harvested in the garden. In several states, Silybum marianum is an invasive pest plant or a declared noxious weed. Thus, in view of its weedy nature as well as its toxicity to livestock, its cultivation should not be encouraged.

Text © 2010 Rufino Osorio. All images copyrighted by their respective owners as indicated above.

Posted by Rufino Osorio at 7:54 AM 0 comments 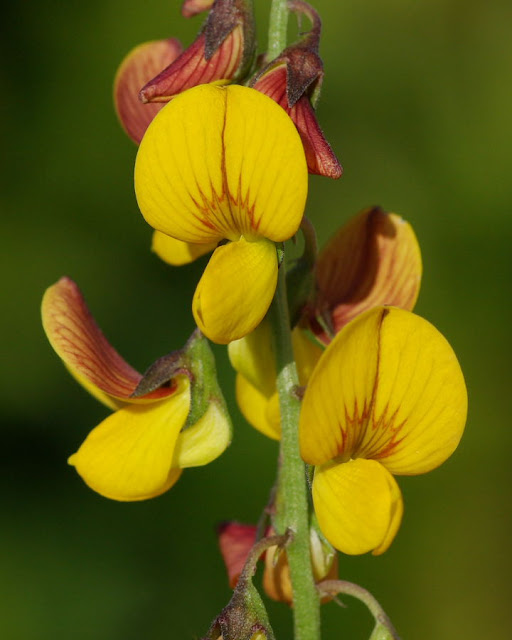 Crotalaria pumila is an annual or short-lived perennial that generally grows up to about 12 inches tall and about as wide or wider. It has alternate leaves with each leaf divided into three segments. The flowers are bright golden yellow with usually some red streaks, the streaks being especially pronounced on the back of the banner petal. Flowers are soon followed by inflated light brown pods with loose seeds that rattle when the pods are shaken. The plant does not spread vegetatively; however, the pods eventually split open with great suddenness and ballistically hurl the seeds several feet away from the parent plant.

The principal horticultural uses are as a small ornamental wildflower, as a low groundcover, and as a butterfly garden or insect garden plant. Two groups of insects are attracted to Crotalaria pumila: the foliage is used by the caterpillars of the cassius blue butterfly and the bella moth (a beautiful day-flying moth with white wings banded with orange-pink spots), while the flowers attract small native bees, which serve as the principal pollinators. Plants are very easily grown in any open, sunny spot with well-drained soil and the seeds germinate within a few days if the hard seed coat is lightly nicked or scratched between two sheets of sandpaper.

Crotalaria pumila: has a remarkably wide range that includes Florida as well as the western United States. It has also been reported from Maryland, and it has been introduced on the Hawaiian Islands. Outside of the United States, it occurs in both the Lesser and Greater Antilles and from Mexico south to Paraguay and Argentina.

Posted by Rufino Osorio at 9:40 AM 2 comments 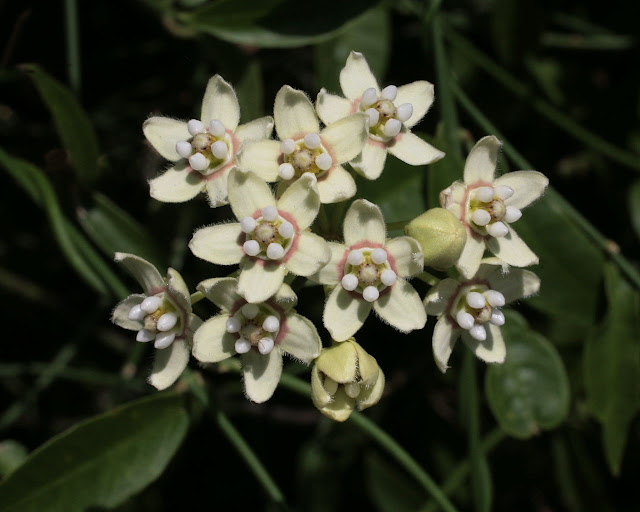 Funastrum clausum is a vigorous vine with long stems capable of climbing to great lengths. It is commonly known as white twine-vine or white milkweed-vine and is usually associated with wet areas such as ditches, pond margins, and the edges of mangroves and swamps. The plant is tolerant of disturbance and is occasionally found in overgrown thickets in old empty lots and along railroad tracks. It has a variety of horticultural uses and can be grown in a moist, sunny area wherever a vigorous, freely flowering vine is desired. It is also highly recommended for insect and butterfly gardens since the sweetly fragrant flowers attract a wide variety of insects and the foliage is eaten by the caterpillars of monarch, queen, and soldier butterflies.

Until recently, this plant was known as Sarcostemma clausum and it is still found under that name in many publications and web sites.