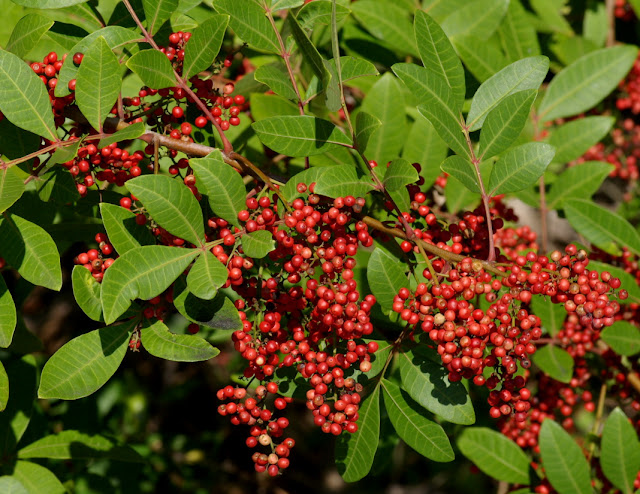 Earlier this year, I photographed the fruits of the notoriously invasive Brazilian-pepper (Schinus terebinthifolius). While studying the images later that day, I realized that I could combine two of the images to make a 3-D gif. Such gifs are interesting because they achieve a 3-D effect by wiggling two images back and forth. The appeal of such gifs is that no glasses, special equipment, or effort is needed to see the 3-D effect.
Above is a regular image of the Brazilian-pepper. Below, is the same image which I have combined with a second image to produce a 3-D gif. 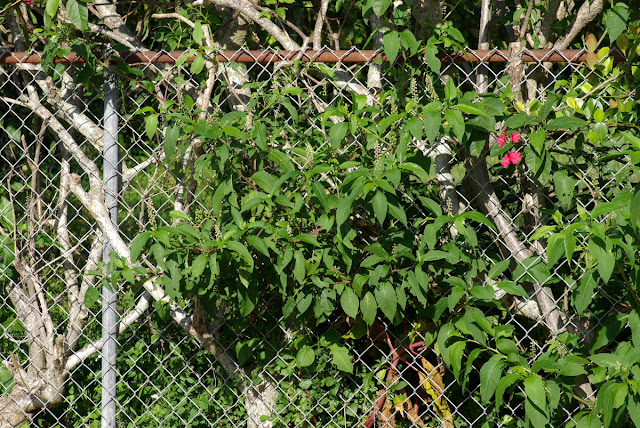 Early last year, I collected a few seeds from a pokeweed, Phytolacca americana, that had spontaneously arisen among some saw palmetto palms (Serenoa repens) in a local park. The seeds were duly planted and I selected one seedling to pot up and, eventually, plant in the ground in my front yard. That plant happily grew and produced an enormous number of fruits, much to the delight of the local mockingbirds. Unfortunately, its large size was threatening its more delicate neighbors so I consigned it to the compost bin.
This spring, I noticed its progeny popping up here and there. The photograph above shows a plant growing in my neighbor's yard along our mutual fence line. The picture below is a close-up of the flowers of that same plant. Another plant showed up on my property about 100 feet (30.48 meters) from where the parent plant had been removed. And speaking of the parent plant, a seedling came up inches away from the site of the original plant and that seedling is now about 3 feet (0.9 meters) tall and beginning to flower and fruit. It looks as if pokeweed is here to stay in my yard and, with the help of some feathered friends, perhaps other yards and vacant lots in the neighborhood.
Update: Since this blog post was published on 22 June 2013, the pokeweed established about 100 feet (30.48 meters) from the parent plant died. When I pulled it up from the ground, its root system had rotted, presumably as the result of the torrential, record-breaking rains that Palm Beach County had this spring and early summer. 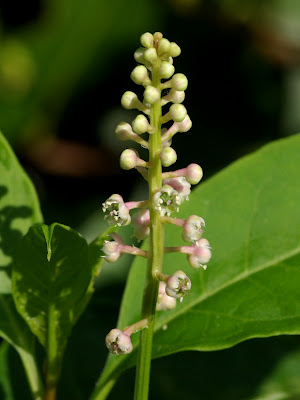 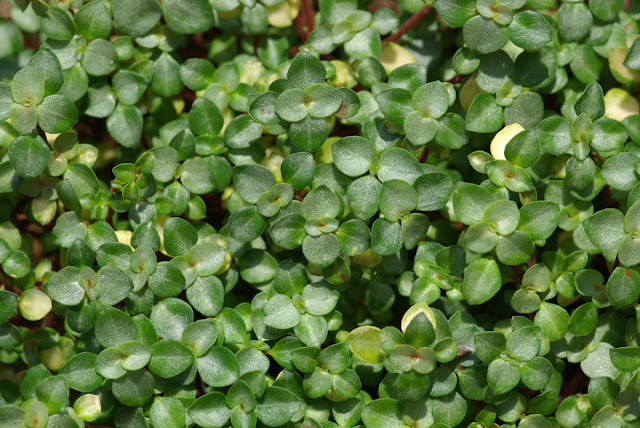 A small, trailing, groundcovering plant known as Pilea glauca is readily available on the internet. See, for example, the online store of Josh's Frogs or Pernell Gerver's online store. Other web sites list the plant as Pilea glaucophylla. The plant is both common enough and popular enough to have two common names: silver sprinkles and gray artillery plant.
There is, however, one big problem with the name, Pilea glauca. It has never been published. Although the name is in use by the gardening public, the name does not appear in any database of botanical names, including The International Plant Names Index or Tropicos. It is an example of what is known in botany as a nomen nudum, which literally translated means a naked name. In standard botanical practice, each name is tied to a type, that is, an herbarium specimen on which the name is based and each name must be legitimately published if the name is to be considered valid. However, Pilea glauca is floating around the internet completely naked, bereft of the "clothing" provided by a type specimen and legitimate publication.
The name Pilea glaucophylla has neither problem. It was legitimately published in 1936 by E.P. Killip in a publication titled Contributions to the United States National Herbarium and there is a type specimen collected by É.F. André in Colombia and deposited in the herbarium of the Smithsonian's National Museum of Natural History. Unfortunately, there's one small problem: we can search for it at the Smithsonian's NMNH herbarium website and we can see for ourselves that Pilea glaucophylla is a completely different plant than the one circulating on the internet by the name of Pilea glaucophylla.
So, what is the name of this mystery plant? I know that it is definitely not Pilea glauca since that is a nomen nudum that has never been published. And I know that it is not Pilea glaucophylla since that name refers to a completely different plant with erect stems and differently shaped leaves that are about 3-inches (7.6 centimeters) long or longer. I thought that I would never learn its name; however, thanks to the original version of this blog post and the power of the Internet, I heard from David Scherberich of the Jardin Botanique de la Ville de Lyon in France, who informed me that he knows the plant as Pilea libanensis of Cuba. Neither David nor I have confirmed that it is indeed that species by examining vouchered herbarium specimens but a preliminary search on the Internet confirms that Pilea libanensis is very likely the name of our little, silvery, carpeting Pilea.
It is easy to understand how this example of folk taxonomy came about. Pilea libanensis has silvery-green or silvery-bluish leaves that resemble in color the glaucous foliage of some landscape shrubs and trees, especially that of certain conifers. Therefore, at least until now, no one questioned the validity of either Pilea glauca, which means "glaucous Pilea," or Pilea glaucophylla, which means "glaucous-leaved Pilea," because both names aptly fitted the plant. But these incorrect names should not be used and, for now, I am referring to it as Pilea libanensis.

Note: This post was modified from its original version, published on 22 June 2013, by including information in a personal communication by email from David Scherberich dated 12 August 2013.
Image and text © 2013 Rufino Osorio
Posted by Rufino Osorio at 4:34 PM 1 comments 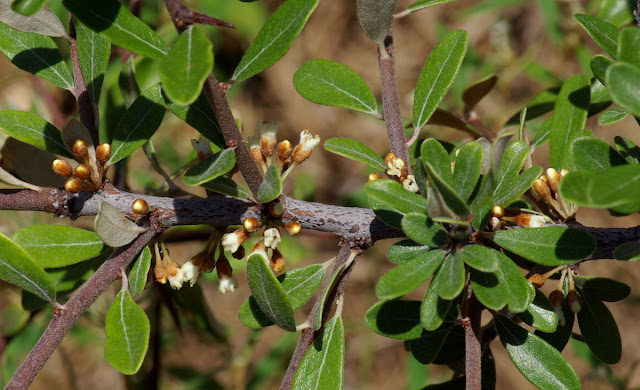 Tough bumelia is a common, thorny, deciduous or evergreen shrub or small tree native to North Carolina, South Carolina, Georgia, and Florida. It occurs nearly throughout Florida but is wholly absent from the Panhandle and the western portion of northern Florida. It is found in nature in dry, well-drained soils in full sun to light shade in sandhills, sand scrub, and coastal hammocks. The lower surface of the leaves are completely covered with a dense layer of silky hairs that varies from pale brown to a rich mahogany brown. This dense coat of hairs no doubt slows down the loss of water through transpiration and is an adaptation to the plant's xeric habitat.
Tough bumelia, like other Sideroxylon species, is a wildlife powerhouse since the dense, thorny branches provide protection for small birds and animals, the tiny white flowers attract an extremely wide variety of insect pollinators, and the dark, 1-seeded, olive-sized fruits have a gummy, but sweetish, pulp that is eaten by larger birds and various mammals.
In older works, tough bumelia is often listed as Bumelia tenax. Also, it is often described as being "spiny" but that is incorrect. Spines, in the strict sense, refer to modified leaves or their parts. Bumelia tenax is more correctly referred to as "thorny" since its sharp-pointed armature is derived from modified branches, not modified leaves.
Image and text © 2013 Rufino Osorio
Posted by Rufino Osorio at 3:23 PM 0 comments 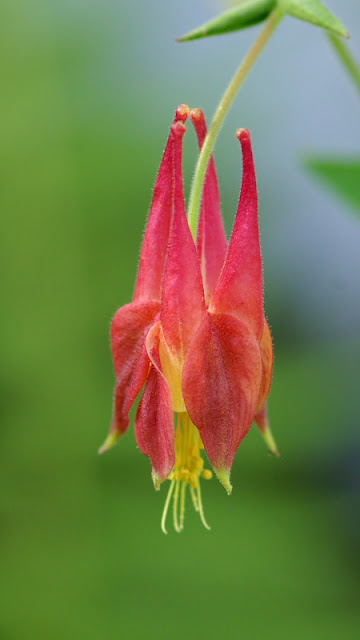 Wild columbine is a common wildflower throughout the eastern and central portions of Canada and the United States. In eastern North America, it reaches its southernmost limit in Jackson, Liberty, and Washington counties in Florida, where it is a state-listed endangered species. Wild columbine is often promoted as a hummingbird plant and hummingbirds do indeed visit the flowers; however, plants in bloom will also attract native bees as well as hawk moths and sphinx moths.


The plant in the photograph above was given to me as a seedling last year (from a garden in Vermont!) and opened its first flowers this week. Wild columbine will grow and flower in south Florida; however, it usually behaves as an annual or short-lived perennial that seldom lives past one or two years of age. 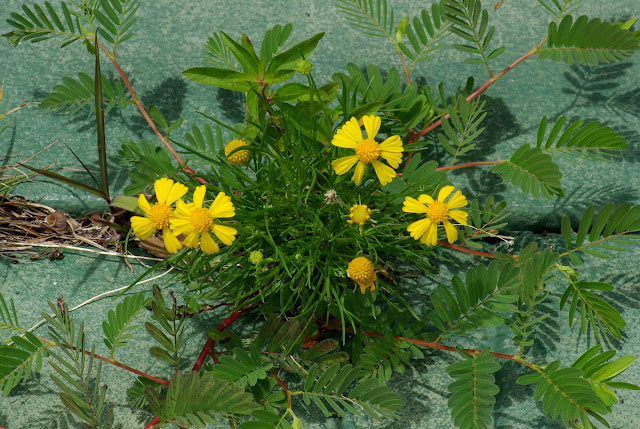 A Spanish daisy, Helenium amarum, made itself at home in my carport. It is a perky and pretty yellow annual daisy native to Florida. It is joined by two additional native annuals: slender three-seeded mercury, Acalypha gracilens, and partridge pea, Chamaecrista fasciculata. Rounding out this little micro-biome are two native perennial grasses (Paspalum species). One of the grasses is visible on the left side of the Spanish daisy and just a hint of the leaves of the second grass is visible at the extreme left of the photograph.
Image and text © 2013 Rufino Osorio
Posted by Rufino Osorio at 8:04 PM 0 comments

Flat sedges, members of the genus Cyperus, are rarely grown even though 35 native species occur in Florida, along with an additional 19 non-native species. Flat sedges are mostly wetland plants found in moist pine flatwoods, bogs, marshes, swamps, and along the margins of streams, ponds, and lakes. They also occur in artificial impoundments and ditches. A few species occur in dry sandy areas, such as sand scrub. Some species, both native and non-native, are extremely weedy and perhaps this has given the whole genus a bad reputation. Their flowers are individually insignificant and come in various shades of green or brown; however, they are aggregated into often conspicuous, sometimes even attractive, inflorescences.


I am currently growing, as potted plants, two native flat sedges. The first, shown above, is Cyperus odoratus (fragrant flat sedge). It is a common weedy annual found nearly throughout Florida. The second, shown below, is Cyperus haspan (leafless flat sedge). It is unusual in that the leaf blades are usually reduced to an inconspicuous sheath and its culms appear to be leafless. It is a perennial species that, like Cyperus odoratus, is a common, rather weedy, sedge found nearly throughout Florida.


Nearly all flat sedges are effortlessly grown so long as they are provided with moist soil and plenty of sunlight. Usually, their cultivation presents only two significant problems. Each plant is capable of producing hundreds or thousands of seeds, each one of which seems to readily germinate. And flat sedges are identified on the basis of minute, technical, recondite characters and are very difficult for most gardeners to identify. As a consequence, it is often difficult for non-botanists to know whether a given flat sedge is a native species or an introduced, non-native species.

Last year, the rugose spiraling whiteflies were everywhere and on everything in my yard, including orchids and grasses. They did their worst damage on a 15-year-old small-flowered pawpaw, Asimina parviflora, a northern and central Florida shrub or small tree that I was told was impossible to grow in south Florida. However, the small-flowered pawpaw did not know it couldn't grow in south Florida and, in its 15th year, it was flowering profusely and setting dozens of fruits. It was a good-looking plant and was one of the focal points of my backyard but the whiteflies killed all top growth. And I don't mean they defoliated it. All of the smaller branches and all but the lowest portion of the main stems were killed. Luckily, it resprouted from near the base this year and the whiteflies have left it alone . . . so they could focus all of their energy on the poor Biscayne prickly-ash.