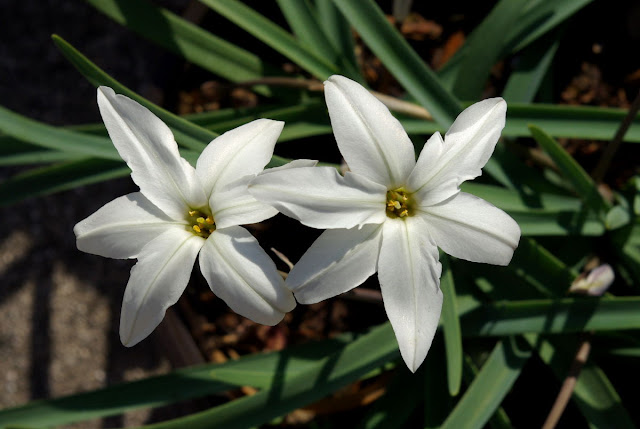 Ipheion uniflorum 'Alberto Castillo' is a small, South American bulbous plant in the onion family. Flowers are typically some shade of blue but 'Alberto Castillo' is a robust, large-flowered plant with pure white flowers that was originally collected in Buenos Aires, Argentina. A few bulbs were given to me by Rob Hopper. I grew the bulbs as potted plants but Rob also planted them in the ground, where they grew equally well and freely flowered. 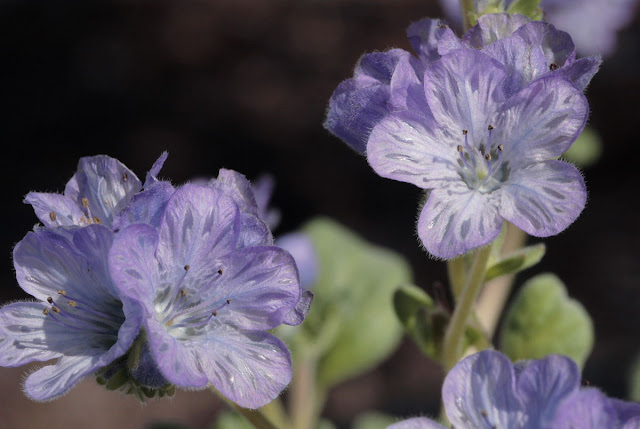 In 2010, I came across seeds for sale of Phacelia purshii, an annual native to Ontario and much of the eastern United States. Since it has showy flowers noted for their distinctively fringed petals, I decided to try to cultivate it and purchased a packet of seeds. Based on the foliage alone, I quickly realized that the seeds were not Phacelia purshii. Upon flowering, the plants keyed out to Phacelia divaricata, a very different species native only to eastern California, from the Klamath ranges, south to the San Francisco Bay region and the inner south coastal ranges.

Seeds germinated readily, the seedlings grew very rapidly, and they quickly flowered. Just as quickly, however, the plants set seeds and died. However, during the several weeks that they were in flower, the plants produced attractive masses of lavender-blue flowers with pale, almost white centers. The petals were marked with translucent patches of tissue and this was unlike anything that I had ever seen in any flower. These translucent patches can clearly be seen in the above image of the flowers.

I have never seen seeds of Phacelia divaricata for sale under that name and I assume that, like so many native plants, it's charms are overlooked because it does not originate from some far-off exotic land.

A Visit to the Garden of Michael Manna

On Saturday, February 26, 2011, Ryan Leavengood and I visited the home of fellow Florida Native Plant Society member, Michael Manna. The following is a brief account of that visit.

The variety of plants grown by Michael was amazing but four principal groups stood out in my mind: Florida native plants; carnivorous plants; utilitarian plants such as edible, medicinal, or herbal plants; and a variety of tropical plants, most notably, orchids and bromeliads. One remarkable plant that did not fit any of these categories was a venerable Florida cracker rose that was growing to perfection and had beautiful, dark green foliage unblemished by even a hint of disease or insect damage. Among the utilitarian plants, there were a variety of spinach substitutes, as well as a dwarf everbearing mulberry tree, with the fruits of the latter proving a great delight to Michael's daughter, the 18-month-old Willow.

Michael is perhaps best known for his carnivorous plant collection and he grows a wide variety of butterworts (Pinguicula species) and Asian pitcher plants (Nepenthes species). Also well represented are sundews (Drosera species) and American pitcher plants (Sarracenia species). Unfortunately, at the time of our visit, the American pitcher plants were mostly dormant so we had to content ourselves with admiring the freshly developing flower buds, which promised a bountiful show of blossoms a little later in the year. Also present in Michael's collection of carnivorous plants was the Albany pitcher plant (Cephalotus follicularis), which grows in the vicinity of the town of Albany in southwestern Australia, as well as the rainbow plant (Byblis liniflora), also hailing from Australia and named for its linear leaves bedecked with dewy glands that beautifully glisten in the sunlight.

Although many Florida native trees and shrubs are grown by Michael, the most interesting native plants for me were the numerous native wildflowers that he cultivated. The list is a very long one and included many small, colorful plants that are rarely ever grown by gardeners of any kind, whether focusing on native plants or not. Among these were Polygala lutea (orange milkwort); Dichanthelium species (witchgrasses); Xyris species (yellow-eyed-grasses); and Viola species (wild violets), of which Michael had three different species, this being the largest number I have ever seen in a south Florida garden. Also noteworthy, among so many other noteworthy plants, was a tub of the native yellow-flowered water-lily, Nymphaea mexicana.

The images below represent a small sample of the many beautiful plants Ryan and I observed during our visit:

Posted by Rufino Osorio at 8:48 AM 0 comments